What Are the Rights If One Got Arrested on a Criminal Case? 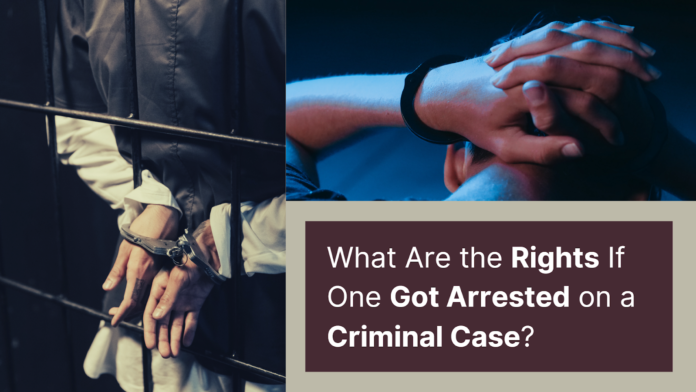 Whether you’re guilty or not, being accused of a crime is still a nightmare not everyone can wake up from. So, a thousand things must go through your mind if you have landed in a similar situation.

Your top priority would be to get yourself out of prison before this thing goes to trial. For that, you must hire the best defense attorney you can find. Then, you must allocate money if you want to get bail. But, then, how will you pay for your lawyer when you get one?

It is understandable how so many questions arise in your mind regarding how to get yourself out of this situation. But, unfortunately, one of those questions also includes knowing your rights as an accused.

So, to ensure nobody takes advantage of you in a criminal case, let’s discuss all this in detail.

For people who don’t have any legal information or have never seen or experienced the justice system closely, chances are they won’t know their rights as an accused if they ever get arrested in a criminal case.

This is why any accused must contact a criminal lawyer after arrest. But unfortunately, investigators and police officers tend to manipulate such situations to their advantage and sometimes even extract an admission of guilt by threatening the accused with things worse than their imagination.

A defense lawyer will strengthen your case and keep you from being harassed or interrogated unlawfully. So, the first thing you must do when you think a case is being built against you or you get arrested is to hire a criminal defense lawyer.

What Are the Rights of an Accused while Being Arrested, During Trial, and in Jail?

While you’re in the custody of police and throughout your case hearings and trial, your rights are protected under the Sixth Amendment.

What are those rights? Have a look into it.

It is tough to remain calm and composed when you’re stopped and arrested by the police for a crime you probably didn’t commit. But even if you did, your rights are still protected by the laws in the United States, and you shouldn’t be made to feel otherwise.

When people get arrested, they tend to lose their calm temperament and often act nervously, which makes them fall into difficult situations. The only way to get through this is to know what your constitutional rights are, and we have mentioned them below,

Your rights to due process means you shouldn’t be denied life, property, and liberty without proper authorization.

Below is the list of all the rights one would still have even after being accused with charges and arrested by the police:

Remember, never argue with the police officer while you’re being arrested. To them, it may seem like you’re resisting, which can lead to more criminal charges. Instead, follow the instructions of the police officers regardless of whether you’re innocent or not.

Once you have been arrested and have landed at the police station, there is a severe chance that you will have to see this thing through trial and prove your innocence. Luckily, the judicial system in the USA has been regulated and provides additional rights to the accused in court. These are as follows:

During the case trial, you also have the right to be presented as guilty by the prosecution beyond a reasonable doubt. If the prosecution fails to do it and the jury doesn’t make a unanimous decision, the case will be declared a mistrial, and all the charges against the defendant will be dismissed.

Lastly, if you’re held responsible for the crime and get convicted through the justice system, you will face possible jail time. You have certain rights in jail as well. Here is the list:

When you get arrested or go to jail, you must know that police, the investigative team, and the prosecution will never be on your side. In some cases, the investigators may even lie to you or intimidate you to get an admission of guilt they can submit in court and not go to trial.

This is why the constitution gives you specific rights, and you must practice them for your good. Even if you cannot hire a lawyer right after arrest, staying quiet and abiding by your rights can keep you out of further trouble.

So, hire a defense lawyer to ensure your case is strong and you can fight against the charges. And knowing what your rights are will make things easier for you as you move ahead to prove your innocence.

Are you looking for a way to improve your...
Read more
Previous article5 Crucial Factors to Remember When Looking for a Loan
Next articleLong Distance Movers: What To Expect And How To Prepare For The Big Move?